From the very start of his career, Christian Frei established a reputation as an exacting documentarist, with a perfect grasp of his subjects. He follows his protagonists closely, always in search of authentic moments, and always keeping the whole picture in mind. His films are considered to be humanistic and universal, as much as subtle and insistent. The Swiss author, director and producer is one of the most successful documentary film directors worldwide.

Born in 1959 in Schönenwerd (Switzerland), he studied television at the Department of Journalism and Communications of the University of Fribourg. In 1981, he directed his first documentary short film, Die Stellvertreterin. After co-directing Fortfahren with Ivo Kummer in 1984, he became an independent filmmaker and producer. He made another short film, DerRadwechsel. Then he moved on to feature length documentaries withRicardo, Miriam y Fidel (1997). With this striking portrait of a Cuban father and his daughter, torn between faith in the revolutionary ideas and the desire to emigrate to the United States, Christian Frei takes a critical look at Cuban society. Carefully avoiding taking sides, he leaves it up to the spectator to form his own opinion.

War Photographer marks a turning point in his career as director in 2001. Due to the Oscar nomination for Best Documentary and numerous prizes worldwide he had the international break through. For this feature length documentary, Christian Frei spent two years accompanying war photographer James Nachtwey to different war zones around the world. The film shows his protagonist to be a shy and reserved man, far from the hothead image associated with his profession. Frei intelligently plays with the role of the spectator, confronting him with the ambivalence of war photography and the role of the media. The documentary appeals to the spectators’ sense for compassion and thematically approaches the theme of war itself. Still popular with audiences and critics today, the film has become a classic.

With The Giant Buddhas, Christian Frei once again deals with a subject of strong political and global interest: The film revolves around the destruction of the two giant Buddha statues in Afghanistan’s remote Bamiyan Valley. “I see my film as a hymn to the diversity of opinion, religion and culture”, says Christian Frei. The film turned out to be a documentary that filled a necessary gap of knowledge far from the everyday media reportage.

At the Sundance Film Festival in 2010 Christian Frei won the World Cinema Directing Award for his film Space Tourists (2009). The documentary juxtaposes the journeys of the extremely rich tourists traveling with the astronauts in to space with the poor Kazakh metal collectors risking their lives in search for rocket waste fallen down in to the planes once the space shuttle has left. As a result, the film turns out to be a humorous and poetic declaration of love for planet earth. Critics acclaimed this film for it’s breath-taking imagery and richness of insights, having strengthened Frei’s reputation as one of today’s most original and innovative directors.

Since 2006, Christian Frei has been an associate lecturer on Reflection Competence at the renowned University of St. Gallen (HSG).

From 2006 to 2009 he was president of the Documentary Film Commission for the film section of the Swiss Ministry of Culture.

Since August 2010 he is President of the Swiss Film Academy. 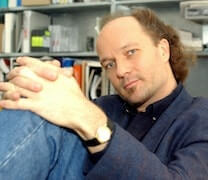