Claude Lanzmann, son of a Jewish immigrant-family from Easteran Europe, was a French filmmaker, known for the Holocaust documentary film SHOAH (1985). While his family disguised their identity and went into hiding during World War II, he joined the French resistance at the age of 17, along with his father and brother, and fought in Auvergne. Lanzmann was the chief editor of the journal Les Temps Modernes, founded by Jean-Paul Sartre and Simone de Beauvoir. He was a lecturer at the European Graduate School in Saas-Fee, Switzerland. Lanzmann, who died in 2018, aged 92, has won the prestigious BAFTA, Berlinale and César awards, among many more. 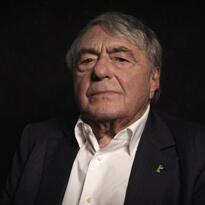