Constantin Wulff was born in 1962 in Hamburg, Germany. He grew up in Switzerland, and later moved to Austria. He studied at the Filmakademie Wien and has worked as a journalist and filmmaker. Between 1995 and 1996 he gave lectures at the University of Vienna. From 1997 to 2003 he was co-­‐director of the Diagonale – Festival of Austrian Film in Graz. He was a founding member of Navigator Film Vienna.

Since 2003 he has kept a position as a board member of dok.at, the Austrian Documentary Film Association. Wulff has been working as a curator of numerous retrospectives of documentary films and advisor to international documentary Film Festivals. He´s also part of expert commissions in the field of film subsidies. As a journalist he co-edited publications “Schreiben Bilder Sprechen– Texte zum essayistischen Film” (1991) and “Marcel Ophüls: Widerreden und andere Liebeserklärungen – Texte zu Kino und Politik” (1997). Wulff lives and works in Vienna. 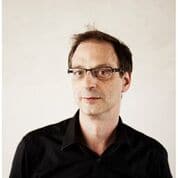