Dan Setton was born in Cairo, Egypt, in 1951 and studied film in London. Setton’s films combine meticulous direction and carefully crafted interviews with intriguing, otherwise inaccessible individuals. The results are penetrating insights into the two worlds that shape his own identity as an Israeli: the dilemmas and horrors of the Holocaust, and for the past decade, the intricacies of the Middle East conflict. Often intensely personal, they are also of unusual journalistic quality.

In 2002 his film SHATTERED DREAMS OF PEACE received the Peabody Award for Broadcast Journalism. Setton was also awarded two International Emmy awards, one in 2000 for his film KAPO and a second for Outstanding Achievement in Direction for his 2003 film IN THE NAME OF GOD about the phenomenon of suicide bombers within radical Islam. Setton is the first and so far only Israeli director to have won an Emmy award.

After dozens of films delving into the darkest recesses of the human soul as expressed through conflict and hatred, Setton is at a turning point in his career. He wants the world to know that the “things that people do that are beyond the ordinary” can also offer great hope. Even in the most turbulent times, ordinary people can make extraordinary choices that can and do make a difference. 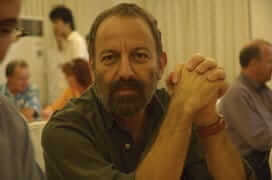