Josh Tickell is an author, film director and expert on sustainability.
In 1997 Tickell captured global attention by driving a French Fry oil-powered “Veggie Van” across the United States and jumpstarting the biodiesel revolution.
His journey culminated in 2008 with the release of his first feature film, FUEL. FUEL won the Sundance Audience Award for Best Documentary, was shortlisted for an Oscar, was screened in the White House and was released theatrically globally.  Tickell and his wife and directing partner, Rebecca Tickell have released a number of award-winning environmental films including, The Big Fix and PUMP, Good Fortune and The Earthing Movie.
In 2017, Tickell published his book, Kiss the Ground, How the Food You Eat Can Reverse Climate Change, Heal Your Body and Ultimately Save the World.  An Amazon Bestseller in four categories, Kiss the Ground details how the effects of climate change can be reversed through regenerating the worlds soils. After 7 years of work, 2020 is the perfect year to launch Kiss the Ground (the documentary) narrated by environmental activist and actor, Woody Harrelson.
Josh’s most recent book, The Revolution Generation – How Millennials can Save the World Before It’s Too Late, gives young people the tools they need to reshape political power, change the climate conversation and, to save Planet Earth’s ecosystems. The documentary of the same title is hosted and narrated by Michelle Rodriguez. 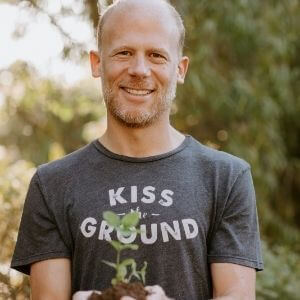