Director/Producer Judy Lieff, dancer, filmmaker, and teacher earned her M.F.A. in dance & experimental film/video from the California Institute of the Arts, following a career as a professional dancer. Judy has produced, directed, and edited many short dance films that have garnered awards and screened internationally. She is a six time grant recipient for dance/media projects and has over eight years of experience working in the film industry in both production and post-production on commercials, industrials, shorts, and Electronic Press Kits for Feature films. Lieff began her relationship with the Deaf community through the making of an experimental cine-poem, DUTIES OF MY HEART. The film became a catalyst for four consecutive grants to teach video production workshops she designed for deaf teens. She is the recipient of a National Dance/Media fellowship from the Pew Charitable Trusts and two New York State Council on the Arts (NYSCA) independent film grants. Deaf Jam was awarded finishing funds from the Independent Television Service Open Call competition and is Lieff’s first feature length film. 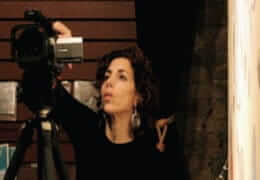