Ra’anan Alexandrowicz is a director, screenwriter and editor. He is known for the documentary The Law in These Parts (2011), which received the Grand Jury Award at the Sundance Film Festival, a Peabody award, and numerous other prizes. His earlier documentaries, The Inner Tour (2001) and Martin (1999), were shown in the Berlin Film Festival’s Forum section and MoMA’s New Directors / New Films series. Alexandrowicz’s single fiction feature, James’ Journey to Jerusalem (2003), premiered in Cannes Directors’ Fortnight and at the Toronto International Film Festival and received several international awards. Alexandrowicz’s films have been released theatrically in the United States and Europe, and broadcast by PBS, ARTE, the BBC, as well as other television channels. Ra’anan served several times as an editing advisor for the Sundance Documentary Fund and his film The Viewing Booth is supported by the Sundance Art of Nonfiction initiative. 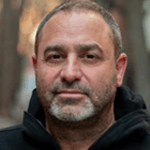