Roy is now based in the Mediterranean city of Haifa, where he produced and directed the award wining short fiction film ‘MAZAL’, starring the acclaimed actress (winner of the best actress award at the 2005 Cannes Film Festival), Hana Laszlo. ‘Mazal’ won 5 international awards for best short film and has participated in over 40 international film festivals.

Roy Sher is a member of the Israeli Director’s union and the Israeli Documentary Filmmakers’ Forum, the film ‘My Sweet Canary’ is his debut Feature film. 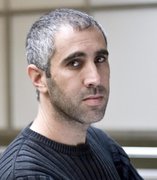