Regurgitated Bodies: re-enactment as the production of reality in The Act of Killing
Reset password

Home / Regurgitated Bodies: re-enactment as the production of reality in The Act of Killing

Regurgitated Bodies: re-enactment as the production of reality in The Act of Killing 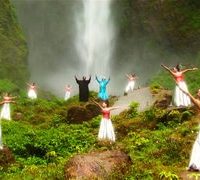 One of the many revolutions accomplished by The Act of Killing is the use of re-enactment of mass murder in order to force perpetrators into the skin of their own victims. Unrepentant former members of Indonesian death squads fashion themselves after the image of their favourite Hollywood heroes and genres in order to represent their crimes. But the spectator is denied empathy thanks to a Brechtian focus on the mask in the making and on the reality of the medium, including the audible shooting instructions and the interviewer’s voice. Distanciation is thus elicited through the unveiling of the cinematic apparatus and of the actors as real-life criminals. As a result, cinema turns into non-cinema, that is, into reality itself. Conversely, the protagonist Anwar fully identifies with his victims, in the classical voyeuristic way, whilst performing and then watching the rushes of his film within the film, a gruesome exercise that includes the re-enactment of cannibalism. This paper looks at the ways in which the film uses pretence to produce the real, culminating in a harrowing sequence of long takes of Anwar’s uncontrollable retching, regurgitating, though alas only symbolically, the devoured bodies.
LÚCIA NAGIB, PROFESSOR OF FILM AND DIRECTOR OF THE CENTER FOR FILM AESTHETICS AND CULTURES, UNIVERSITY OF READING.