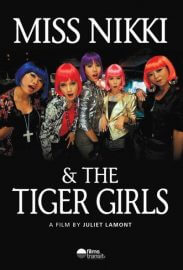 Miss Nikki and the Tiger Girls - Login To Watch
To start watching, please select your school and use your professor or student login

Back
Book a Screening
Thank you for your interest in holding a screening of Miss Nikki and the Tiger Girls.
Please let us know a couple of key details, and we will be in touch with you ASAP to book in a screening.

Miss Nikki and the Tiger Girls

Request From My library
More information
Thank you for your interest in Miss Nikki and the Tiger Girls.
Please let us know a couple of key details, and we will be in touch with you ASAP.

Miss Nikki and the Tiger Girls

Born out of an unholy alliance between Miss Nikki, an artistic and ambitious Australian free spirit, and Peter Thein, an unscrupulous Burmese entrepreneur out to make a buck, the story of the Tiger Girls and their journey towards self-expression is an uplifting look at Girl Power against all odds. Using songs written by the girls to progress the narrative, their search for freedom of expression mirrors the tentative steps their country is taking to do the same thing.