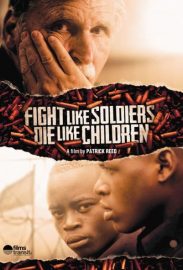 Fight Like Soldiers, Die Like Children - Login To Watch
To start watching, please select your school and use your professor or student login

Back
Book a Screening
Thank you for your interest in holding a screening of Fight Like Soldiers, Die Like Children.
Please let us know a couple of key details, and we will be in touch with you ASAP to book in a screening.

Request From My library
More information
Thank you for your interest in Fight Like Soldiers, Die Like Children.
Please let us know a couple of key details, and we will be in touch with you ASAP.

When you’ve been to hell and back, how do you shake the memories? This question has haunted General Roméo Dallaire since 1994, when he was UN Force Commander during the Rwandan genocide, explored in the award-winning documentary “Shake Hands with the Devil”.
Now Dallaire has found a reason to live: embarking on a global mission to eradicate the use of child soldiers. Will Dallaire succeed where others have failed? Or will he once again be forced to look on as the world turns away?