My Sweet Canary - Login To Watch
To start watching, please select your school and use your professor or student login

Back
Book a Screening
Thank you for your interest in holding a screening of My Sweet Canary.
Please let us know a couple of key details, and we will be in touch with you ASAP to book in a screening.

Request From My library
More information
Thank you for your interest in My Sweet Canary.
Please let us know a couple of key details, and we will be in touch with you ASAP.

An exuberant musical and cinematic journey across Greece, and Turkey in search of Roza Eskenazi, an artist whose music shaped the soundtrack of the region for almost a century. Three artists devoted to her legacy retrace her steps and perform her songs, as they delve into the myriad reasons as to why the music of Greece's best-known and best-loved Rebetiko singer is still so relevant to them today. 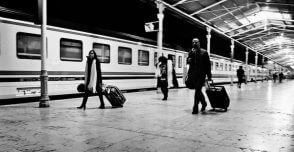